Royalty at North Thompson Fall Fair and Rodeo since 1950 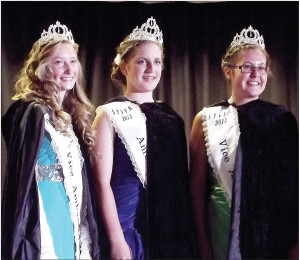 The North Thompson Fall Fair & Rodeo Association’s Ambassador Program has a rich history that dates back to 1950, this program has the honour of being the third oldest Royalty Pageant in the Province of British Columbia!

Originally called ‘The Queen Pageant’, the Association changed the name in 2012 to the ‘NTFFRA Ambassador Program’ in an effort to better reflect the purposes of the program now being offered. At that time, the Program Committee made a number of improvements to the curriculum, bringing it up to modern day standards without losing its valued traditions.

The NTFFRA Ambassador  Program is geared towards building self-confidence, personal awareness and self-motivation, all the while having “a whole lot of fun”. The committee stresses that this is not a “beauty contest”, or a “most popular girl contest”, rather a search for the newest Youth Ambassadors to proudly represent the North Thompson Fall Fair and Rodeo Association and the entire North Thompson Valley.

The NTFFRA Ambassador Program is open to any young lady enrolled in grades 9 through 11, who is a resident of the North Thompson Valley. Home schooled young ladies are welcome to participate.

Each year the new candidates are provided with training in the areas of public speaking, self-defence, equine awareness, hair and skin care, modelling, dancing, resume writing, proper etiquette, North Thompson Valley information and history, and the history of the NTFFRA. In some years other training is provided when available.

Candidates also have an opportunity to travel as a group to other communities as they help to promote their area and participate in the candidate training process.

A number of bursaries are available to the candidates who take part in the program, and these are awarded at the annual NTFFRA Ambassador Coronation held in late August.

The committee is sensitive to the financial burdens that for some may be a reality; therefore, the cost to both the candidates and their families is kept minimal. Fund raising, community service, and the many wonderful candidate sponsors who step forward each year are the biggest part of the program’s success.

This program starts at the beginning of each year with a call for candidates, being presented in the schools by a recruitment committee during a lunch hour for any young ladies who may be interested. The candidate search is also advertised through valley media outlets. Registration forms are completed by candidates and signed by a parent or guardian, and a ‘meet and greet’ is then held for candidates and their parents/guardians to meet with the current royalty and the Ambassador Program Committee. Once all the candidates have been signed up the program is underway for the calendar year, which annually includes these events:

The North Thompson Fall Fair and Rodeo Association appreciates and thanks all of the committee members and candidates who have participated in this program since the first crowning was held in 1950, and to all of the young ladies who have worn the North Thompson Fall Fair & Rodeo royalty crowns since that time, and say, “Thank you for being such sparkling ambassadors of our Association and of the North Thompson Valley, we have greatly enjoyed working with each and every one of you, and we remember you fondly each year.”

If you would like more information on the North Thompson Fall Fair and Rodeo Association’s Ambassador Program please email: ntfallfair@gmail.com 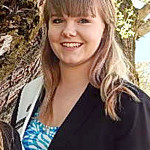 Annie Butcher has recently become a citizen of Canada and is very proud of her new status – she moved here in grade 3 and loves Canada. Annie is now 15 and lives in Clearwater. Her hobbies include horse riding, soccer, volley ball and hanging out with friends. She has three brothers who are a big part of her life. Annie is going into grade 10 at Clearwater Secondary School and her favorite subjects are PE and science. After high school Annie plans on attending university to study for a degree in science and would like to become a physiotherapist, specializing in sporting injuries. After university Annie plans on traveling around the world for a year before settling down. She finds learning about new cultures very interesting and would really like to spend a period of months living in a French speaking city. Annie is grateful to her sponsor Lana Laskovic and Armour Mountain Office Services for her support, and is happy to have met all her new friends through the Ambassador program. 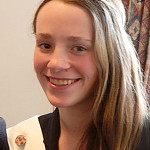 Lee Dionne is 15 years old and will be going into grade 10 at Barriere Secondary School. She has lived in Barriere for five years. Lee says she likes to volunteer her time to the community by attending the Remembrance Day Parade with her Cadet Group, do roadside cleanup, help with the Barriere Food Bank and help at the No Host Bazaar for the Catholic Women’s League. She is active in athletics, and plays baseball, soccer and basketball. Lee loves horses and riding whenever she can. She also has a passion for cooking and is looking forward to going into a culinary arts program. Lee has been in Cadets for four years and holds the rank of Master Corporal. Lee says she has enjoyed her time with the Ambassador program and looks forward to lots more experiences. Lee appreciates her sponsor, the Catholic Women’s League. 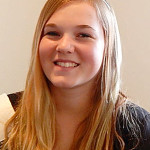 Jillian McInnes is 16 years old and is going into grade 11 at Barriere Secondary School. Jillian enjoys reading, dancing, hiking, kayaking and anything to do with music. In her spare time Jillian is often found taking dance classes such as ballet, hip hop and jazz at the Academy of Dance, reading a good book, or outside enjoying nature.  After high school Jillian would like to get a post secondary education at Thompson Rivers University by entering the nursing program. Jillian is most grateful to her sponsor Stamer Logging.

65 Years of Royalty at North Thompson Fall Fair and Rodeo

The Queens/Ambassadors of the North Thompson Fall Fair & Rodeo 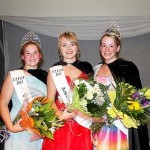 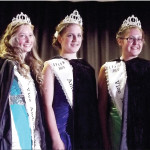 Don’t miss the upcoming North Thompson Fall Fair & Rodeo Ambassador Coronation Friday, August 22, 7 pm at the Barriere Lions Hall Doors open at 6:30 p.m. Please come out and support the candidates Tickets $10 at the door.       If you would like more information on the North Thompson Fall Fair and Rodeo Association’s Ambassador Program, please […]

A childhood dream came true for Louis Creek’s Kayla Holowaychuk last Saturday evening when she became the North Thompson Fall Fair and Rodeo Association’s 60th Queen. Many in the audience noted that perhaps a touch of déjà vu was evident as the first NT Fall Fair queen crowned in 1950 was also a Louis Creek […]

There was standing room only at the beautifully decorated Curling Rink August 28th when the five 2009 Fall Fair Queen Candidates presented themselves to the public at their Talent and Speech event. This was the finally to many months of preparation, hard work and numerous educational and exiting engagements before this years Queen will be […]

September 1, 2007 Our newly crowned Royalty made their first public appearance in the 2007 North Thompson Fall Fair & Parade.Photos compliments of June Webb & NT Star/Journal   August 24 & 25, 2007 The 2007/2008 NT Fall Fair & Rodeo Royalty Pageant has concluded. The event was well attended by Royalty from other BC […]

Fall Fair names 2006 Royalty The bar had been set high for the Queen’s crown in the Fall Fair Queen Pageant, which was evident with the quality of entertainment and the polished presentations by the candidates as they competed in back-to-back events over two days on Aug. 25 and 26. The foursome got off to a late start this […]

Sparkling young ladies with dazzling smiles turned out to compete in the Miss North Thompson Fall Fair 2005 Pageant held on Aug. 27 at the Barriere Elementary School. They danced, performed an individual talent, were presented in evening gowns, and answered impromptu questions for eight judges and a large audience who attended the event. The […]

Pageant crowns Queen for 2004 Beautiful young ladies could be found in abundance at the 2004 Miss North Thompson Fall Fair and Rodeo Queen Pageant. An enthusiastic audience packed the Barriere Elementary School gymnasium to see Ashlynn Harris and Holly Rose Vesper crowned fall fair queen and princess for the year ahead. The five contestants […] 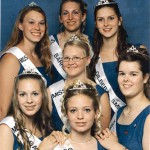 GATE PRICES: Adult $15, Students/Seniors (65+) $10, Children 10 and under Free; Parking FreeSorry, no dogs past the ticket booth. Please Leave your dogs at home.